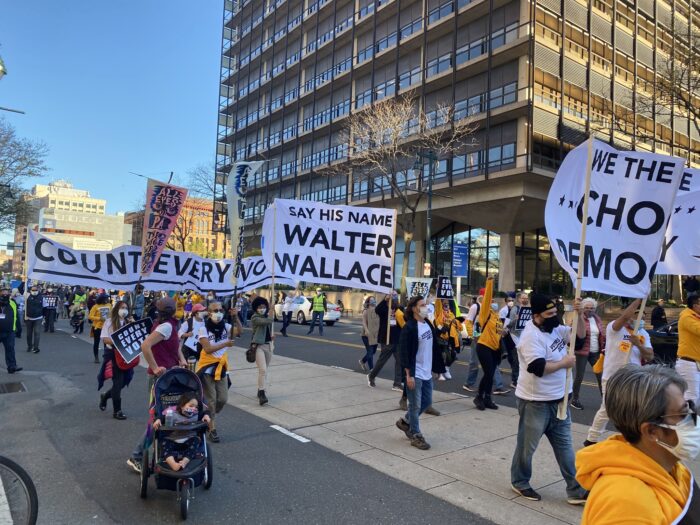 All eyes are on Pennsylvania right now. While Joe Biden may ultimately win the presidential election without needing to win Pennsylvania, a Biden win in PA could be the final nail in the coffin for a Trump re-election.

In this contentious 2020 election season, Republicans are employing two key strategies to stop our communities’ voices from being heard. First, major corporations are buying off our elected officials in what is the most expensive election cycle in the history of the country. Second, right-wing politicians are carrying out a series of tactics meant to suppress the votes of Black, Indigenous, and People of Color (BIPOC) communities across the country, and notably right here in Philadelphia.

Corporations are not innocent bystanders in our cities. In fact, many corporate executives’ donations and corporate political action committees (PACs) prop up the elected officials that are making decisions to militarize polling stations and inflate police budgets.

Last week, in cities across the country, including Philly, the national guard was deployed to “enforce order” during election week. The presence of police and military forces is exascerbated by the recent murder of Walter Wallace Jr. by the Philadelphia police. Elected officials and corporations continue to rely on policing institutions to “maintain law and order” and protect the property of the ultra wealthy- whether it be as a community grieves in the aftermath of the murder of an unarmed black or in the lead up to an election season where Philadelphia’s voter turnout could decide the 2020 presidential election.

The most egregious of all voter suppression tactics being discussed is the idea that legislatures in swing states should select a Republican slate of electors to send to the electoral college, regardless of the popular vote. Republicans, with support and backing from their corporate funders, could exploit a flawed legal system to undermine the voice of the people and hand over the election to their party.

Below is a list of Philly based corporations and power brokers who have invested millions in election cycles to maintain their power and influence over the US political system, at the same time investing nothing in the communities that they extract wealth and resources from. We must put pressure on them to join the call to count the votes and uphold our democracy!

Despite the attempts to weaken the voices and votes of Philly residents, our voices cannot be silenced. Below is a list of our demands.

We demand that the city provide no extra money for useless police reforms. No extra money for tasers. No extra money for sensitivity training. The way to ensure this doesn’t happen again is to reduce the police’s ability to harm members of our community. Instead of handing police more money and more power to cause harm, the city should use those funds to invest in unarmed civilian first responders trained in de-escalation.

We must demand accountability from the corporations bankrolling the politicians that are willing to subvert the will of voters. We are calling on these wealthy elites and executives to publicly pledge to demand back all the money they have given to any elected official that refuses to count every vote and honor the results of the election.

We further call on them to donate those refunds to BIPOC-led grassroots community organizations engaged in voter registration drives in BIPOC communities in the state. Going forward, we demand that corporations stay out of politics altogether. Corporations have never been and will never be the guardians of democracy.

PETITION: Fire The Police Officers Who Killed Walter Wallace Jr., Ban Police from All Mental Health Calls and Refuse to Give Them Extra Money for Useless Reforms
PETITION: Tell Wealthy Corporations to Stop Bankrolling the Republicans Suppressing Our Votes
PrevPreviousNobody Comes for Philly: Take the Pledge to Count Every Vote
NextReflecting on a Year of Resilience + StrengthNext
Scroll to Top