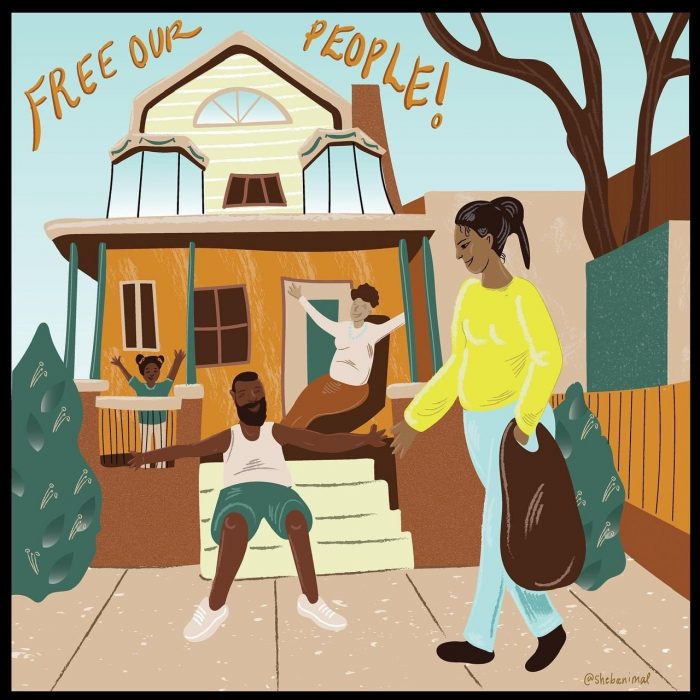 “A few years ago, while at the youth study center, my son caught tuberculosis. Even though he was treated, his immune system will always be compromised. He is now at CFCF, which is the same kind of setting as the youth study center. He has a detainer and a $300 bail, but I don’t know where the motion is on his case. I am afraid that he will catch the coronavirus and his immune system will not be enough to fight it off. He can barely get an inhaler for his asthma and the jail only has 4 ventilators, all which are in use. I can’t see him because they don’t have video visitation for State Road and I don’t know if he’s ok. I can’t sleep, I can’t think. I don’t know if they have masks or if they are even able to wash their hands. Nothing. When he caught TB, DHS called me and said ‘sorry’. I want to know if my son dies from this virus, is Mayor Kenney going to send me a tweet saying ‘I’m sorry for your loss’? I would be devastated.”

These are the words of Rashena Carter, a Philadelphia mother whose 20-year-old son is currently trapped in a detention center during the COVID-19 crisis. On Saturday, April 4th, she shared this story during a virtual town hall hosted by Philly African American clergy. The event brought together pastors, City Councilmembers, the District Attorney, organizers, currently incarcerated people and family members to discuss the conditions in city jails where the coronavirus is rapidly spreading.

The town hall was a part of the #FreeOurPeople campaign, a citywide movement to get people out of jail during the COVID-19 crisis. The event highlighted the fear and uncertainty many are facing in and out of the system. Ms. Carter’s story was just one amongst others that brought a human face to the painful reality of those who have loved ones in jail.

Jay, who is battling cervical and ovarian cancer while at Riverside Correctional Facility, spoke about the poor conditions in the jails.

“My bail is $1,000 and now the coronavirus is here, it’s a little terrifying,” he said at the town hall. “They stopped all the visits … right now they only let us out five at a time and we can only use the phone and the showers … It is very overwhelming and devastating for a lot of women in this unit … My message is let us come home. Let us deal with this epidemic with our families.”

Jay is now part of a class action lawsuit, lead by the ACLU of Pennsylvania, against the city of Philadelphia over its failed response to COVID-19 in the jails.

When news broke that the coronavirus would spread to the United States, organizers across the city knew that jails would be hit hard unless Mayor Kenney and other officials proactively implemented emergency orders to release some of the jail and juvenile justice center populations. Unfortunately, Philadelphia lagged behind, while other cities like Cleveland and Pittsburgh implemented large-scale release efforts. On March 12, the #No215Jail coalition sent a list of demands to the city to take preventative measures. Their concerns were not answered, and just two weeks later the first cases of COVID-19 began to appear in Philadelphia. Now, there are over 100 confirmed cumulative cases of COVID-19 in city jails and one confirmed death.

This lack of action prompted the #No215Jail coalition — which have long mobilized for criminal justice reform in Philadelphia  — to take rapid direct action in pressuring Mayor Kenney and the First Judicial District to step up and release as many of our neighbors as possible from Philadelphia jails.

This includes those held on cash bail amounts they can’t afford, anyone held on a detainer for technical violations of probation, and those currently sentenced who are close to the end of either parole or a county sentence. They further call on the courts to implement an immediate review process for all people currently in detention, including youth who are awaiting trial, held because of a probation violation, or are in detention because they are awaiting fostercare placement.

Mark Houldin, a defense attorney in PA, has been working with the #No215Jail coalition to demand immediate decarceration. For Mark, the urgency to release individuals from prison is just as urgent as asking individuals to stay home. He is disheartened by the lack of urgency from the courts.

“What we have seen over the past couple of weeks is that there has been no urgency to hear motions, in fact they were denying motions on the basis that our concerns were not an emergency, as if COVID-19 was not enough of a basis” said Houldin. “A case by case approach to release folks when you look at 4,000 people in city jails alone – who are presumed innocent or serving really minor sentences – is probably not going to work in a pandemic with emergency action, but it really is not going to work when the city has wasted two weeks with the courts doing nothing.”

It is almost impossible to social distance in jails, as pointed out several times by Philadelphia Managing Director Brian Abernathy, and most buildings lack proper sanitation. These circumstances combined with poor healthcare access and that many incarcerated people have preexisting conditions makes it a disaster scenario. The exponential growth of COVID-19 at Rikers Island in New York City and Cook County Jail in Chicago underscore that tragic reality.

It is also important to realize that many folks in jail right now are there for reasons contrary to what people might think. “A lot of people in county jails should not be there. They are there illegally on a bail they cannot afford,” said Houldin.

Jails differ from prisons. The vast majority of people in jail are awaiting trial and presumed innocent. Many are in jail because they do not have the money to pay bail, or are being detained on a charge of violating conditions of probation or parole. Those who are convicted are serving short sentences of typically one year or less. According to a 2018 report by the Philadelphia Bail Fund and Pennsylvanians for Modern Courts, the average bail amount in Philadelphia is roughly $25,000 and 10 percent or $2,500 is required for release. That’s more than most families in Philadelphia, America’s poorest big city, can afford, and white people are twice as likely to pay this than those that are Black.

We know the COVID-19 crisis is already disproportionately affecting Black people in and out of the jail population, it has exposed a pre-existing public health crisis that has long denied black and brown people the care they need.

It is Time to Act Now

Luz, an Afro-Latinx Puerto Rican citizen and community leader who shared her story in the clergy virtual town hall, was released from Riverside Correctional Facility two weeks ago. This victory didn’t come from the actions of the courts and Mayor Kenney, it was the result of mobilization by the Philadelphia Community Bail Fund, an organization that raises money to bail out individuals who cannot afford bail themselves. We thank organizers of the #FreeOurPeople campaign, the Philadelphia Community Bail Fund, and the Philadelphia Bail Fund for doing the work Mayor Kenney and the Judicial courts are failing to do. But these organizers can only do so much, and if our elected judges do not move faster to implement mass release, conditions right now could get worse.

The first death of a person who was incarcerated has already been reported. Just last week, Yvonne Harris, a Black woman in her 40s who was due to be released from Riverside Correctional Facility in August, passed away. Judges denied her the chance to be released early in this public health crisis and to be safe at home with her family. This is why we stand with those demanding mass release. It is not a matter of politics. It is a matter of life and death. If Judges stay resistant, we can only fear that these death reports in jails will increase. What does that say to families? What does that say to the public? It is time for the courts to act. It is time for Mayor Kenney to take executive action. It is time to #FREEOURPEOPLE.

TAKE ACTION: Join the to Free Incarcerated People during the COVID-19 Crisis

PrevPreviousA Call For Respect: Philly Workers Take Action in the Wake of COVID-19
NextFighting for Housing during COVID-19Next
Scroll to Top